THE Agricultural and Rural Development Authority (Arda) has scaled up its transformation drive with a programme targeted at rebuilding swathes of Zimbabwe’s derelict farms.

The State-run firm yesterday announced a joint venture (JV) programme that will see ill-equipped A1, A2 and commercial farmers entering deals to improve food and commercial crop production.

Agro-based Zimbabwe has struggled to grow enough food to feed its growing population, estimated at about 16 million, since the country slipped into a crisis following controversial farm seizures in 2000.

Agricultural exports have also been hammered, triggering a catastrophic foreign currency crisis that has entered its 22nd year.

Government has struggled to provide capital and implements to transform the new farmers into full-scale commercial farmers, triggering widespread hunger, unemployment and deindustrialisation.

The bulk of Zimbabwe’s industries rely on agriculture produce for raw materials.

Arda said the scope of deals to be covered in JVs were wide.

It said agreed projects were due to start in the coming summer cropping season.

“Arda is undergoing transformation to spearhead rural development, industrialisation and ensure national food, feed, fibre, biofuels and seed security for the attainment of Vision 2030,” the parastatal said in a statement.

“Pursuant to this, Arda is inviting A1, A2 and commercial farm owners with irrigable land, who find themselves with limited resources to extract full value from their land, to express interest to join the market-led Arda JV programme for summer crop production and enhanced productivity commencing this 2022/2023 summer season.”

Apart from the crucial industrialisation agenda, the role of strategic firms like Arda has become imperative, as Zimbabwe explores how to navigate food shortages.

The Famine Early Warning Systems Network (FEWS NET) warned last week that the southern African country could be at the throes of its toughest year after registering total write-offs in key food crops during the 2021/22 agricultural season.

It said regions facing the toughest year include Manicaland, Masvingo, Midlands, Matabeleland North and South provinces, where some water sources could dry by next month.

FEWSNET’s latest report, which covers the period June 2022 to January 2023 revealed shocking details of the struggles that lie ahead for citizens in a country that is already at its knees.

It said there has been total write-offs in Zimbabwe’s staple maize crop across some regions, while many more have reported up to 80% wilting.

While experts say cumulatively, rainfall was near-average during the season, the 2021/2022 season was affected by erratic rainfall and poor distribution patterns, which overstretch crops in regions that struggle even during normal seasons.

In Parliament, worried senators on Tuesday called for practical interventions to rescue the country’s national herd due to droughts.

While moving a motion on schemes to redeem the national herd from the devastating effects of drought, Senator Eleven Kambizi said there were high risks of losing livestock if authorities slept behind the wheel.

“The country should not focus on managing crises but needs to encompass the full cycle of disaster management,” Kambizi said.

“This is now evident that drought is a natural disaster or hazard which we should be prepared for and the impacts should be dealt with before their occurrence. Cattle are very vulnerable to water and food shortages during drought period, hence they are prone to the following: stress, malnutrition, potential deaths, lower craving rate, high mortality rate among young stock, milk output also falls due to reduced feed.

“We need to assemble drought informing websites and information houses for our livestock producers. There is need to conduct vulnerability and risk assessments to identify areas or regions prone to droughts, we need to plan and establish response action and strategies. There is need for drought coordination and communication with stakeholders.

“Another way is to improve legislation procedure of community participation.  We need to empower and educate our farmers.  We need continuous research on the ground.  We need to develop policies to fight drought and to develop and implement drought related public awareness programmes and campaigns.”

“The country should not focus on managing crises but needs to encompass the full cycle of disaster management,”

Shot in the arm for women, youths, SMEs 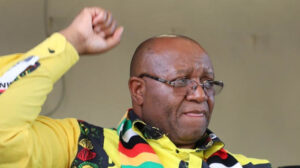